I recently decided to re-read Umberto Eco’s strange, dense novel Foucault’s Pendulum. I was pleased to discover that it not only holds up over the decades since I first read it way back in high school, but that I found much more in it to appreciate now that I’ve had a few dozen additional years of, well, “life and stuff” to color my perspective.

Much of the book consists of a very convoluted tour of occult beliefs and conspiracy theories—at times it’s just a firehose of information from Eco’s very widely-read mind. It’s hard to imagine any bizarre historical belief, no matter how obscure, slipping by without at least a brief mention in Pendulum.

And so as I read, I found myself waiting hopefully for a mention of… Cthulhu. While most of us read Lovecraft for the cool slimy monsters, bits of the Cthulhu mythos (or at least, its infamous tomes) have been co-opted by real-world belief systems. Mostly (I presume) in a winkingly self-aware postmodern kind of way. That’s exactly the sort of oddball thing that should crop up alongside all the other crazy beliefs Eco explores. And anyway, it’s hard for me to imagine that Lovecraft wasn’t represented in the pulpy pop culture that Eco appreciated.

Friend, I was not disappointed. In the final pages of Foucault’s Pendulum, a shout-out: 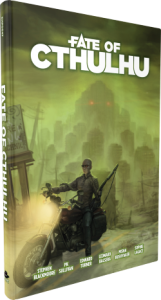