In the future I may find myself with enough time to subject this, and other, Voyager episodes to in-depth analysis. But it’s late and there’s a two-week-old baby upstairs who could wake up at any moment and demand a bottle, so time is of the essence. In lieu of a Serious Analysis, then, I offer a few random thoughts on “Caretaker,” the series pilot of Voyager. 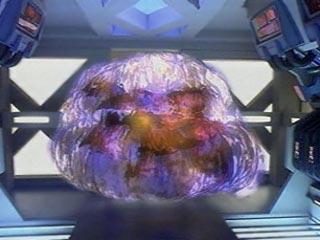 The Caretaker. He's even less charming in his fiddle-playing old man form.

Quick plot overview: while hunting for a vanished terrorist starship, Voyager and its crew are transported to the other side of the galaxy. There they find the (similarly transported) Maquis ship and confront the godlike alien being who brought them here. They get involved with some annoying peaceful aliens and some ugly post-apocalypse-style scavenger aliens, lecture several different aliens about their religious beliefs and moral responsibilities, and make the tough moral choice to sacrifice their own sure route back home in order to Do the Right Thing/Violate the Prime Directive.

The opening sequence: “Caretaker” opens with a short battle sequence involving the Maquis (Bajoran terrorists/good-guys-gone-too-far who played a major role in Deep Space Nine), and I happen to know (from looking at the back of the Voyager Season 1 DVD set) that these Maquis crewmembers will be a permanent part of the Voyager cast. This is intriguing—the Maquis added a nice shade of moral gray to DS9, and I wouldn’t mind seeing some of that in Voyager as well. 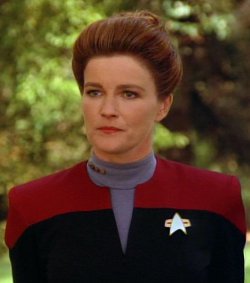 Captain Janeway: When Voyager first came out, most of the discussion among my Trekkie friends centered around how lame it was that Voyager had a female captain. Fortunately I do not fear girls quite as much as I once did, and do not react with visceral fear to Janeway’s authoritative female presence. Going purely by this pilot episode, I think she does fine. She’s given opportunities throughout the episode to evidence both the Gruff and Understanding sides of her character, and in doing so seems an acceptably stable central character for the show. If I had to guess, I’d say that “Caretaker” deliberately plays up her toughness/”masculine” side in an effort to fend off criticism from angry fans—she gets pleasingly no-nonsense with the aforementioned Space Scavengers, and intones the word “FIRE” with the appropriate gravitas. Because of both the role of captain and the narrative requirement that there be a mature authority figure at the center of each Star Trek series, it’s a challenge for Star Trek captains to also be compelling personalities. Time will tell if Janeway does something interesting with her adequate-but-somewhat generic captain role.

Star Trek Drama: Other shows could never get away with this nearly as much as the various Treks do, but right out of the gate, Voyager shows us it can create little dramatic sequences that consist entirely of incomprehensible technobabble. Early in the episode, Voyager has been damaged by its cross-galaxy journey, and we witness this:

See? The drama is created by meaningless technobabble, and shortly thereafter resolved by it. I mock, but hey—this is part of the reason I watch this show. 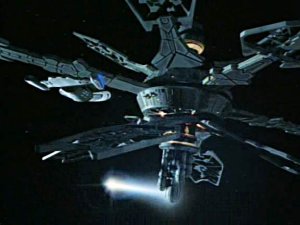 You wouldn't guess it from out here, but on the inside it looks a lot like a Cracker Barrel.

On the Array: Man, all of the Star Trek shows seem to really love situations in which the high-tech, uniformed protagonists find themselves in rustic rural scenes. The down-home country characters in this scene are over the top even for Star Trek; but given that they actually are stereotypes manufactured for this purpose by the godlike alien, I guess I can accept it. Just this once.

The Ocampa: While I like the idea of a civilization driven underground by environmental catastrophe (and then threatened by marauding bands of scavengers on the planet surface!), the Ocampa end up as little more than a weak Moral Lesson. Their spokesman is a typical Star Trek even-tempered, soothing-voiced, platitude-speaking religious leader—and may I note here that in 30 years of attending weekly worship services, I have yet to encounter this archetype in real life. (Maybe I’m in the wrong religion?) At any rate, although we get a brief glimpse at internal strife within the Ocampa over their dependence on the Caretaker, we don’t see enough of them to get very invested in their plight. Not that I’m complaining; they seem rather dull.

Lecturing the Caretaker: Janeway’s lecture about allowing children the freedom to grow up does indeed seem like good parenting advice and I will take it into account as I raise my own kids. But scaling that advice to the planetary civilization level, she’s arguing that leaving the Ocampa to eke out a life on a hellish desert planet (starvation, water shortages, victimization by scavengers, etc.) is the right thing to do because it will build character. I know, I know, I get it. But this sort of condescending advice is why other factions in the universe don’t like the Federation.

Final battle: Nice to wrap up the episode with a space battle, although we don’t get to see much of it. I wonder if we’ll see more of this scavenger alien faction in episodes to come (as they promise), or if they’re just a villain of the week. This battle establishes that Voyager is not an all-powerful combat vessel, which should make the inevitable future encounters with hostile aliens interesting.

Warping away into the sunset: Hey, the warp nacelles fold up when Voyager goes into warp! Neat.

The Crew: One thing I’ve not touched on is the large cast of characters introduced in the pilot. As time allows I’d like to look at Voyager’s large cast of characters. Suffice it to say that this looks like an adequate, if not remarkable, motley crew of individuals about on par (as far as plot potential goes) with Deep Space Nine. The diversity of races, personalities, and outlooks on Voyager is meant to sow the seeds for all sorts of interesting storylines to come, and I’m sure it does—but at first glance, it also feels forced and overdone.

Verdict: “Caretaker” contains interesting elements but winds up feeling tepid and un-adventurous. It successfully introduces the cast, giving each crew member one or two plot hooks that we can expect to see explored in the years to come. The opening and closing sequences point to Voyager’s “lost far from home” promise, but honestly, the bulk of this plot could’ve been from a Next Generation episode and I wouldn’t have noticed. Despite the dire situation in which the ship finds itself, there is a strange lack of a sense of urgency throughout this episode. It isn’t a phenomenal series opener, but I’m interested enough that I want to see where it goes.