Like every other boy who ever lived, I really really wanted the U.S.S. Flagg, the six-foot-long G.I. Joe aircraft carrier.

My parents were generous with the G.I. Joes and Transformers, but this was a line even they would not cross. I vividly remember the day I was informed in no uncertain terms that I would never be receiving a six-foot-long toy aircraft carrier for Christmas, no matter how good I was.

Which is one reason I had to make it out to the local Geek Garage Sale today; I had heard rumors that this rare artifact would be there. Perhaps after all these years, my dream could come true?

Sure enough, there it was, its grand fo’c’s’le towering majestically over the parking lot of Apparitions Comics, cutting its way across the surface of the asphalt sea with all the power its plastic nuclear reactor engines could muster: 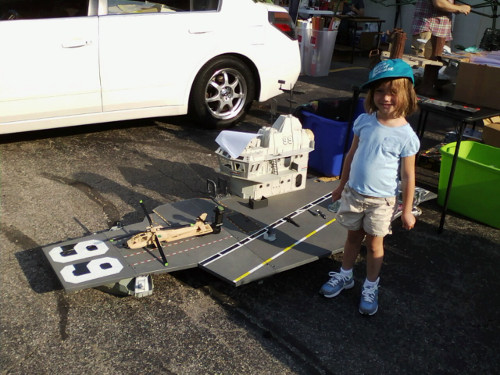 Back when I really really wanted this, this was probably a good foot longer than I was lying down.

Having seen it in person, I can now check off one of the remaining items on my Geek To-Do List. And I can reflect on the karmic irony that my reaction to seeing it in person was precisely that of my parents, when I showed it to them in the pages of a Sears catalog:

Sail on, U.S.S. Flagg. May destiny steer you through the storms of life into the safe port of some other lucky nerd’s basement.