Spoiler-filled synposis: A motley crew of individuals is besieged inside a roadside diner by a pack of semi tractors and other trucks, which have come to life and are seemingly intent on wiping out their human creators and masters.

My thoughts: This early King short story deals with a theme that is now very familiar to any science fiction fan: the machine revolution. In the years since this story was published, many successful books, stories, and movies have built on the idea that one day, the precious machines on which we rely so much (too much, they suggest) will turn on us.

These days, most such stories imagine that it is computers which will revolt, and that their ubiquity and deeply-layered networking will make them nearly unstoppable. “Trucks,” however, hails from a time before computers (as we think of them today) were the brains behind every complex mechanical or electronic gadget; this story is heir to the tradition of “haunted car” tales (a subgenre King returns to in his 1983 novel Christine). 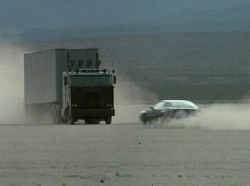 We never get an explanation for this automotive revolt, and the story doesn’t really need one. All we need to know is that every motor vehicle larger than a car is now possessed of a bloodthirsty cunning, and is working in coordination with other vehicles to kill us. The protagonists are a mostly forgettable collection of average Americans—a salesman, a trucker, a cook, some teenagers, and the anonymous narrator—and they follow the horror-survival script closely as they hunker in a diner, watching malevolent semi trucks circle the property. The salesman snaps and makes an ill-advised break for freedom (and dies badly); the narrator tries to rally the others to make longer-term survival plans. After a few more characters are killed, the true horror of the situation becomes clear: the trucks—implied now to have free reign across all of America, and whose ranks now include not only semis but construction vehicles, tractors, and possibly even aircraft—intend for the humans to be their slaves, refueling and maintaining the vehicles in exchange for their lives.

This is a difficult scenario for King to sell, and the story works best if you just don’t think about it too much. The two obvious problems in the trucks’ plan are the simple facts that humans are a) massively numerous and b) able to take refuge in all sorts of places where the trucks can’t go. King anticipates these points and has the narrator reflect that, given time, there are few places on the planet that determined machines could not level, pave, destroy, or reach. I can accept that for the sake of the story, but the implausibility of the scenario keeps “Trucks” from being as tense or scary as horror stories with more… versatile threats.

Of course, King is using this scenario to make an ecological lament: the protagonist’s realization that no refuge remains on Earth that cannot be wrecked by our machines is a critique of urban sprawl and the encroachment of our fuel-guzzling, air-polluting civilization on what was once an open-ended wilderness. And there’s also the suggestion that we’ve become so reliant on our machines and technology that we’re effectively enslaved to it. (This is a point that resonates well in our world of cellphones and social networks.)

Ultimately, “Trucks” is an entertaining but mostly forgettable story. The protagonists don’t do, say, or think anything memorable, and the concept of technology turning on its creator is now such a common plot device that this story comes across as quaint, rather than terrifying.

Next up: “The Road Virus Heads North,” from Everything’s Eventual.