As it was foreseen, so it has come to pass. I’ve done my best to avoid it, not wanting to see with my eyes what my heart knew to be true.
The day that I hauled my Amiga 1200 out of storage, turned it on (how familiar and satisfying the soft click of the power switch!)… and nothing. The hard disk spins up with its comfortable whir, humming along like the quiet banter of an old friend, and everything seems to be going OK… but no more. It’s not booting up. It’s not booting up.
My Amiga is dead.
To paraphrase a certain starfighter pilot, that little machine and I have been through quite a lot together. How many unreadably dull college term papers did it patiently store away for me? How many turgid, mediocre short stories found a home within its metal-and-plastic brain? How many times did it faithfully fire up Shadow of the Beast and Wing Commander at my command?
The Amiga–I believe I even gave it a name once, but never really called it anything other than “the Amiga”–was a great machine, and I have a lot of fun memories of it:

I remember a lot more. But that’s enough for now. The tears just aren’t coming; I think it hasn’t sunk in yet. There are Amiga emulators out there with which I might get my fix, but that just wouldn’t feel right. There’s a community of diehards whose Amigas will have to be pried from cold, dead fingers sometime down the road. And there’s even an effort to bring the Amiga OS to the open-source world, although that particular project violates Andy’s Rule of Basic Decency #42: Don’t Use Seductive Furries In Your Logo.
So the spirit lives on. But my Amiga is dead, and my heart is broken. 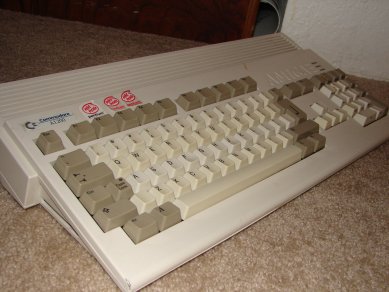