Spoiler-filled synopsis: An arrogant art collector visits a private museum to inspect, and possibly purchase, a famous antique mirror. The mirror, however, is reputed to be cursed. Think something bad might happen when the scoffing collector gazes into it? 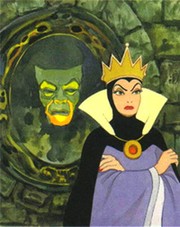 My thoughts: There are a lot of ways you can doom yourself in a horror story. You might decide to descend alone into the lightless basement to check the circuit breaker. You might lean forward to examine the “dead” monster at extremely close range, because it’s dead and there’s no way it poses any danger to you. And here’s another way you can telegraph your impending death: scoff derisively at people who insist that an object is cursed and that you should stop messing with it.

Short, simple, and predictable, “The Reaper’s Image” follows this convention precisely. It features only two characters: a sneering art collector who hopes to buy a famous antique mirror, and the mirror’s old caretaker, who has witnessed its curse in action firsthand. As legend goes, every great now and then, a person looking into the mirror spots something reflected in it that nobody else can see—something that looks like a shadowy figure standing behind them. Once you’ve seen it, you’re destined to vanish without a trace shortly afterwards.

As cursed antiques go, the mirror is mildly interesting. It dates back several centuries, and intriguingly it seems to “claim” people infrequently and randomly. There is mention of a small handful of other sister mirrors—some long destroyed, others in private collections—that might or might not also be cursed. And the curse itself is anti-climactic, but in a good way: instead of the cursed person dying in a freak accident or dropping of a heart attack on the spot, they are seized with a desire to leave the room (to get a drink of water, to grab something they forgot in another room, etc.). And once they step outside the door, they simply never return.

“The Reaper’s Image” is fun, but very lightweight compared to many of the other stories collected in Skeleton Crew. I note that its late-1960s publication date must make it one of King’s earliest published stories, which probably explains why it feels like a practice exercise rather than a fully-developed work. King is always happy to build off of familiar genre tropes, but usually he gives them one or two good twists to make his stories rise above the clichés. Here he doesn’t, and so “The Reaper’s Image” feels like a piece of pleasant filler. That said, it takes a grand total of about ten minutes of your life to read—that’s how much time I spend every night trying to convince my four-year-old son to use the potty before bed, and reading a mediocre Stephen King story is way more enjoyable than that.