It’s always fun to try and identify game rules that came into existence not because they were part of the designers’ vision, but because players insisted on them.

When you’re a game designer faced with player demands for a rule you don’t particularly want to include in the game, you have a few choices. You can simply ignore the requests. Alternately, you could include a passive-aggressive note in the rulebook:

No need to get snippy about it!

That’s from the Star Fleet Battles Master Rulebook, and it makes me smile every time I read it. In defense of the players crying out to the heavens for such a rule, ships ramming into each other does sometimes happen in Star Trek, most memorably in Star Trek: Nemesis; and besides, who wouldn’t want a chance to melodramatically shout “RAMMING SPEED!!!” during the ever-suspenseful SPEED DETERMINATION PHASE of a Star Fleet Battles match?

Nevertheless I can sympathize with the designers’ annoyance here: if it were possible to ram other ships in Star Fleet Battles, every single battle would end with the losing player attempting to ram the other player out of spite, and players would start fielding ships not for their tactical value, but to use as kamikazes. That might be fun for a match or two, but would quickly get old, and doesn’t really seem like the kind of thing the Federation would do.

But there’s another way designers can react to unreasonable player requests: just roll with it. From Tactical Operations, a book of optional advanced rules for Battletech:

In a regular Battletech game, landing hits on a ‘Mech’s nuclear-powered engine can quickly disable the ‘Mech, but won’t result in the Hollywood-style atomic explosion that players have long pined for. But this is the best way to do it: make it an optional rule.

(In this case, the Battletech designers must accept some blame for this rule, because ‘Mech fusion engines exploding is a thing that has happened from time to time in Battletech novels. And the intro videos to the third and fifth installments of the Mechwarrior videogames feature ‘Mechs detonating in big nuclear fireballs when their engines take critical damage. There’s just something about ‘Mech reactors going critical that we can’t get enough of!)

I am sure that most complex games that aim for quasi-realism run into this sort of thing a lot: the tension between sticking to the purity of your vision for the game, and giving players what they want. Know of any other good examples?

Some time ago, I ran a very (very!) short-lived tumblr called There’s a Rule for That in which I posted unusual and/or ridiculous rules I came across in roleplaying (and other) games. I hadn’t thought about that for a while, but after coming across this gem, I’m officially reviving this as an every-now-and-then series here on the blog.

Without further ado, then, I give you: 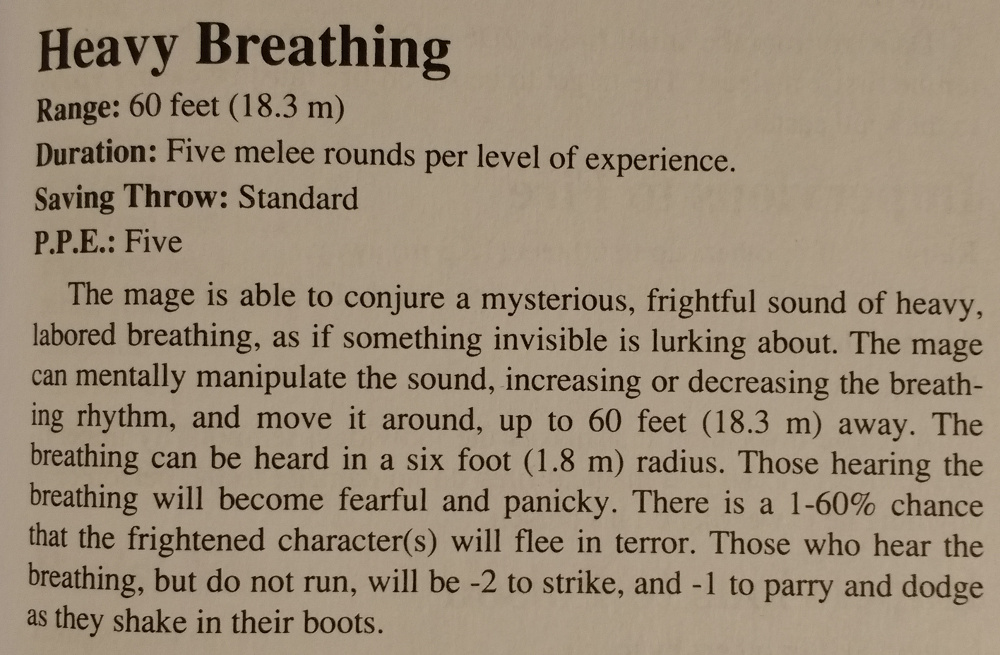 It’s a second-level wizard spell. If they had just called this Spectral Sound or something, it would (well, might) be possible to not giggle.