This week I had the distinct privilege of watching Dungeons and Dragons: Wrath of the Dragon God on DVD. Dragon God is the second recent movie to be based on the rules and setting of everybody’s favorite dice-rolling, kobold-slaughtering pastime. The culturally-oblivious among you may have missed the box-office sensation that was the first D&D movie, the cinematic wretchedness of which did not prevent me from finding it rather entertaining. Let’s just say I had no illusions about what I was getting into with Wrath of the Dragon God, and that I was curiously excited to find out what was in store.

So then, Wrath of the Dragon God. What can I say? I liked it, I’ll just go ahead and admit it. It’s a good, old-fashioned, low-budget, made-for-TV, brimming-with-enthusiasm fantasy adventure flick–the sort of film that’s trying so earnestly and cheerfully that you can’t really find it in your heart to get too worked up about its flaws. If, with its spotty CGI, one-dimensional characters, and mediocre storytelling, it never really gets within range of, say, Lord of the Rings, at least it manages to stay several notches ahead of, say, this.

But what really makes the film fun viewing for D&D players is the faithfulness with which it sticks to D&D canon, and the number of D&D Easter eggs scattered throughout. Unlike the first D&D film, which didn’t have very much to do with the actual D&D game, Dragon God goes out of its way to use characters, spells, locations, and magic items straight from the Player’s Handbook. References to classic D&D modules (Expedition to the Barrier Peaks, Shrine of the Kuo-toa, the Sunless Citadel, Nightfang Spire–to name just a few) abound; the main characters hew strictly to their class stereotypes (fighters, mage, barbarian, etc.); monsters, spells, and magic items are easily recognizable and faithfully portrayed (at one point, we even get a lecture about the difference between Divine and Arcane magic). Even the melodramatic plot and set-piece scenes look like they’ve been copied straight from a typical pass-the-Cheetos-and-Mountain-Dew dungeon-crawl. Faithfully basing your script on a game of dungeon exploration does not make for a great film, but it does make for a fun one.

The extra features on the DVD are in some cases more entertaining than the movie itself. There’s an interview with D&D creator Gary Gygax, and a “making of” video that shows the lengths to which the screenwriter (who seems to be an even bigger D&D geek than I am) went to faithfully reflect the game. (The DVD even comes with a PDF dungeon-crawl adventure based on one of the sequences in the movie. How geeky is that?) I had to grin at the enthusiasm with which the actors–mostly unknowns, as far as I can tell–got into the details of the game. The video shows many shots of film actors poring over copies of the Player’s Handbook and Dungeon Masters Guide, reading up on the game rules behind the spells and items their in-film characters are using. The film commentary–by three Wizards of the Coast staff members, playing the roles of iconic D&D characters–is not quite the Mystery Science Theater it wants to be, but is highly entertaining; if you’re interested in the film but don’t have the stomach for 1.5 hours of cheesy dialogue about dragon orbs, try watching the film with the commentary switched on.

But there’s one more important thing I realized while watching the D&D movie. To those of you who were in my high school gaming group, know that I love you dearly and cherish your friendship. But if the gaming scene in my high school had looked a bit more like this: 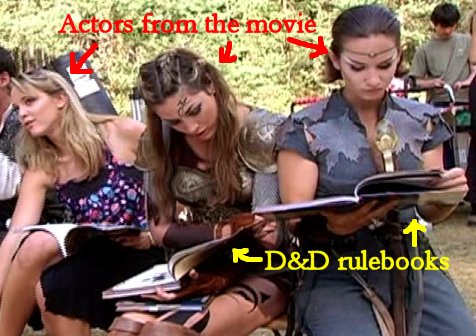 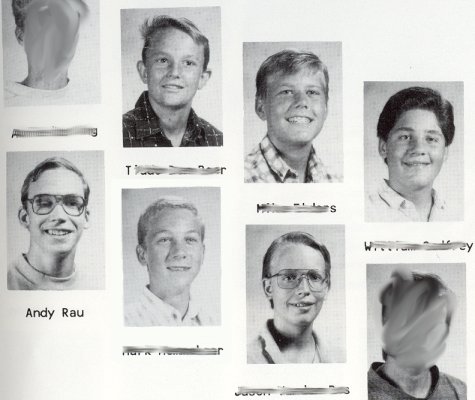 …well, high school would’ve been a lot less awkward. (Or maybe it would’ve been even more awkward… but we’ll never know now, will we?)

So then, the D&D movie. You should watch it–you probably won’t enjoy it as much as I did, but you might find it entertaining.

[Extra credit: match those yearbook pictures with the corresponding links in my blogroll!]