Looks like Beyond the Mountains of Madness isn’t the only classic game book being reprinted this year. Iron Crown is releasing Rolemaster Classic, a cleaned-up version of Rolemaster 2nd edition! 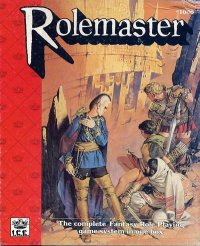 Rolemaster 2nd ed. was the system of choice during much of my early gaming years, and I have fond memories of it. I tried to keep up with the later editions of Rolemaster as they were published throughout the late 1990s, but my enthusiasm for the game slowly waned. I’m not sure if I just got dumber over the years or if Rolemaster got more complicated, but I swear, some of the later Rolemaster editions managed to take rules that I already understood, and make me stop understanding them. I’m sure somebody out there understood how the heck combat rounds worked in the Rolemaster Standard System rulebook, but it sure wasn’t me.

I haven’t cracked open my old RM2 books in many years–mostly because I’m afraid that I’ll find them incomprehensible, and that would confirm the “I got dumber” theory. But when the reprinted version hits store shelves, you can bet I’ll be standing in line, making my saving throw resistance roll vs. Purchase More Unnecessary Game Books.

Kudos to Iron Crown for reprinting an old favorite.

(And while we’re on the topic of the Good Old Days, just this week I picked up the new d20 Dark*Matter sourcebook, also a reprint of a classic game book. 2006 is shaping up to be an awfully nostalgic year.)