Ah, the Minus World. What teenage boy during the NES years didn’t spend countless hours of his life trying to unlock the secret entrance to that legendary, and possibly imaginary, hidden level in Super Mario Bros? 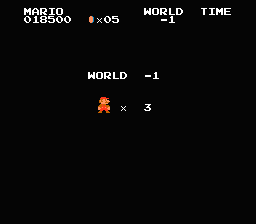 The internet, in its all-seeing wisdom, has of course laid bare the secrets of the Minus World. Enjoy watching somebody do what you never could: find that elusive spot at which a simple jump would teleport you to the forbidden halls of the Holy Grail of 8-bit gaming.

The Minus World–which actually turned out to be a simple glitch in the game, not a carefully-planted Easter Egg–has to be one of the earliest and most potent Gaming Urban Legends. Nobody you talked to had ever actually been to the Minus World, but everybody had a cousin whose neighbor had stumbled upon it on accident and knew the precise sequence of moves required to access it. I myself spent more than a few hours in front of the Nintendo with my friend Derrick in search of the Minus World. Scrawled on a crumpled piece of paper in our possession were instructions that claimed to describe the twisting path to the Minus World–I think Derrick transcribed the instructions, scribbling them down as a cousin or friend or babysitter or some other vague authority revealed them in a conspiratorial whisper.

But the instructions never worked. We never found the Minus World, although viewing the video above, I swear we got really, really close. If only….

It seems to me that the golden age of video game myths is over. Back then, there were no strategy guides or incredibly exhaustive online walkthroughs to reveal to you every corner, every secret, every Easter Egg to be found in a given video game. No, back then these things were mysteries–you heard about them second- or third-hand, then rushed home to try and find them yourself. The myths were usually wild goose chases… but they were true just often enough to keep you coming back for more.

I think the day of the Game Urban Legend lasted up to about the release of Doom and its sister games. Doom and its ilk featured countless hidden spaces and Easter Eggs, and I’m guessing that you, like I, spent at least some of your adolescence running alongside the walls of Doom levels hitting the spacebar in hopes of finding a secret door. But that was about when strategy guides were hitting game store shelves, and about the time that people were compiling their collective Doom knowledge on the fledgling internet.

Those strategy guides and walkthroughs gave us the hidden knowledge we sought… and they stripped the veil of mystery away from the games we played and loved. Suddenly, we knew everything–and this gamer at least, gazing into that abyss, longed for the bliss of ignorance, forever lost. Was the price we paid for our encyclopedic knowledge too high?