As you can see, I’m still learning the ropes. But here’s a front and back picture of Battletech miniature painting attempt #2, an Exterminator: 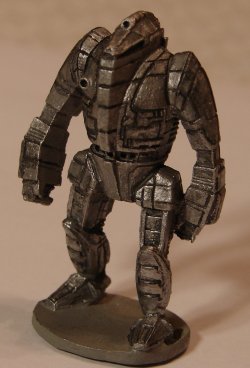 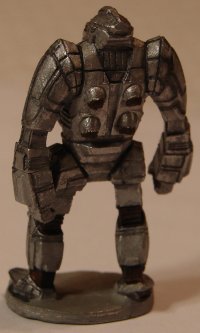 The lighting in the photos is not the greatest; in real life, there’s a slightly more prominent metallic sheen, and there’s some dark-brown undercarriage coloring visible. (You’ll just have to take my word for it.) I like this paint job a bit better than my previous effort, and I learned a few more things about miniature painting in the process.

As for the Exterminator itself, I’ve always thought its oddly bulky torso and shambling gait looked kinda cool. Reading around on the web revealed that it’s usually painted a shiny silver; the body here is silver in color, but I wanted its sparkly shine to be peeking out from beneath a heavy layer of battlefield smoke and grime.

Next up for painting is, I think, a Zeus, another iconic Battlemech. I think I’ll go with some brighter and cleaner colors this time; both the Dragon and the Exterminator are pretty grungy and washed-out looking, and I’m ready for a change of pace. Practice makes perfect, or so they say….

7 thoughts on “Calling the Exterminator”