Spoiler-filled synopsis: A writer worn down by his verbally abusive wife and son receives a magic word processor as a gift. After learning that what he types into the word processor comes true in real life, he uses it to replace his family with a better one. 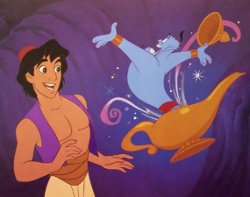 So then: Richard Hagstrom receives a mysterious word processor from his nephew (who was shortly thereafter killed in a car accident caused by his drunken father, Richard’s brother). Richard hides in his study from his shrewish wife (whose obesity King uncomfortably counts as a further moral mark against her, something I suspect he wouldn’t write today) and bratty, disrespectful teenage son. After playing with the word processor a bit, he figures out that he can change reality by typing or deleting sentences with the machine. He also learns that, like the wish-granting genie’s lamp of legend, the word processor will only afford him a handful of “wishes” before it stops working, presumably permanently.

Stories about people temporarily granted magical wishes or godlike powers commonly end up as cautionary tales about human shortsightedness and greed. The wish-maker typically lives it up for the first few wishes, only to learn that his wishes come with unintended consequences that damn him, force him to use his last wish to undo them, or (in the most merciful cases) simply teach him a valuable lesson. (Think of “The Monkey’s Paw,” or of every third Twilight Zone episode.)

For this reason, I spent my time reading “Word Processor” waiting for the other shoe to drop. But just as “Fair Extension” confounded my expectations with its conclusion, so “Word Processor” surprised me by allowing poor, sympathetic Richard a happy ending untainted by a scolding moral lesson. He wishes away his mean wife and kid and replaces them with his kind, formerly-dead sister-in-law and nephew, who always seemed a better fit for Richard than for Richard’s brutish brother. And they live happily ever after.

King pays lip-service to the troubling morality of using “wishes” to erase and replace people you don’t like, but the story maintains overall a fairy-tale feel that discourages overthinking it. If King wanted to amp up the moral ambiguity and make this more of a horror story than a revenge-of-the-underdog tale, he might have made Richard’s wife and son more sympathetic—as it is, they’re depicted as purely awful people, like Cinderella’s wicked stepmother or Harry Potter’s cruel uncle. Although we feel a faint moral concern as Richard rides into the sunset with his happy new family at the end, mostly we’re just relieved that the good guy won for once.

On a different note: Stephen King really hates bullies. I’m sure we’ll talk about this more as my reading project continues, because bullies—both the schoolyard variety and grown-up variants like the Abusive Husband and the Tyrannical Boss—show up in a lot of Stephen King stories and novels. Here, the main bully is Richard’s dead brother, who we learn through flashbacks was viciously cruel to Richard throughout their childhood. King knows how to evoke that white-hot, indignant hate for bullies that we all (except perhaps the bullies) harbor; and his depictions of teenage cruelty are terribly effective at making us sympathize with the victim. (If anything, King sometimes overplays his hand, portraying bullying characters as one-dimensionally evil.) Here, he uses this trope in the service of a simple but satisfying story of benign revenge. “Word Processor” isn’t a classic, but its relatively cheery ending makes it a breath of fresh air in between other, more characteristically bleak Stephen King stories.

Final thought: this is also one of many Stephen King stories to feature a writer as the protagonist. But I think I’ve gone on enough about “Word Processor,” so we’ll pick up that theme in a future story.

Next up: “The Moving Finger,” from Nightmares and Dreamscapes.

Food for thought: If there’s a particular King story you want me to read, be sure to let me know in the comments. And I’m pondering stretching this project to include one or two King novellas, although the extra time required to read them might disrupt my flow. Share your thoughts below!