Story: “Fair Extension,” collected in Full Dark, No Stars. Published in 2010. Wikipedia entry here. Technically a novella, but at 30ish pages it looks like a short story to me. 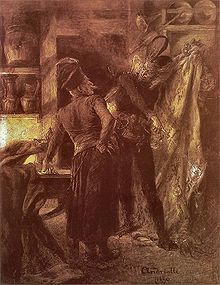 Spoiler-filled synopsis: A man diagnosed with terminal cancer makes a deal with the devil: he’ll get better if he designates somebody else who will suffer in his place. He designates his “best friend,” whom he secretly hates, and enjoys a long, healthy life while his friend’s life falls apart.

My thoughts: “Fair Extension” is a harsh read. After reading many thousands of pages of Stephen King stories over the years, I’m on to most of his tricks and am pretty hard to shock or disturb. But stories like “Fair Extension” are evidence that King knows how to cut deep when he wants to.

Interestingly, this unpleasant little piece is devoid of scary scenes, gruesome murders, or other familiar horror elements. It’s set up as a classic Faustian bargain: a desperate man makes a deal with the devil. In this case, the desperate man is Dave Streeter, recently diagnosed with terminal cancer. After an encounter with a creepy stranger (whose last name is an anagram for “devil,” a detail that would be painfully cheesy if King didn’t have Streeter bemusedly point it out), Streeter agrees to the devil’s deal: in exchange for his own health, Streeter names an enemy to suffer all the bad karma that would otherwise have come Streeter’s way. Streeter’s medical plight makes him initially sympathetic, but his choice of “enemy” reveals his petty, vindicative nature: he chooses his wealthy, successful, happy, and virtuous “best friend” Tom, of whom Streeter has always been secretly jealous and resentful.

We all know how this story goes, right? We’ve all seen this episode of The Twilight Zone. Streeter thinks he’s getting a good deal until the end of the story, when he is plunged into eternal damnation. Or maybe Streeter finds a loophole in his demonic contract and pulls a fast one on the devil, gaining both healing for himself and a happy ending for Tom. Right? Actually, no. “Fair Extension’s” twist is that there is no twist: Streeter takes the deal, is stupendously pleased with the results, and lives happily ever after. No regrets, no guilt, no repentance. No “What have I done?!?” scene at the end.

Tom suffers horribly, and King rubs every detail in our face: his health collapses, his family falls apart, his finances disintegrate; he is broken in every way that Job was. (Confiding in Streeter at one point, he even compares himself to the suffering Biblical figure—unaware that Streeter is the cause of all his woes.) King describes Tom’s suffering with gleeful detail, and I’ll confess that King’s blackly comic tone made this very uncomfortable to read. Among the victims here are Tom’s grown children; had his children been younger (i.e. closer to the age of my own kids), I don’t know if I could’ve made it through this story. Give King credit for this: he knows that for most of us, the prospect of losing our families, health, or economic security in an apparently meaningless twist of fate terrifies us much more than any horror-movie monster ever could.

Many of King’s stories center around the question of evil and suffering. In his most compelling exploration of this question, The Stand, King appears to conclude that suffering is part of a “good” divine plan, but one so distant and unknowable that it is for all practical purposes cruel and random. In “Fair Extension’s” twisted retelling of the Job story, King suggests that humanity creates its own suffering. Whether this is an evolution in King’s understanding of evil or just King having fun poking readers in the eye, I don’t know. But it’s an effective idea for a story; and if the technical execution of “Fair Extension” doesn’t quite live up to its premise, it’s still a reassuring sign that King still knows how to take the gloves off from time to time.

Random note: “Fair Extension” takes place in Derry, Maine. As somebody who was obsessed with It back in college, I love references to this, the most unlucky of Stephen King settings. King throws in little Derry landmarks and references that I remember, or imagine I remember, from It.

Next up: “Word Processor of the Gods,” from Skeleton Crew.