Well, I seem to have misplaced my copy of Night Shift. If you’ve ever been to our house, you know that any book lost amidst the sea of tomes therein is quite possibly lost forever. Hopefully I’ll locate my copy and get to “One for the Road,” but if not, I’ll switch the next story in the lineup to “The Night Flier,” from Nightmares and Dreamscapes.

In the meantime, here’s something a little different but still King-related. In 1979, King published—under the pseudonym “Richard Bachman”—a short novel called The Long Walk. (After “Bachman’s” true identity was exposed by an alert reader, The Long Walk was most commonly found collected with several other novellas in the 1985 King omnibus The Bachman Books). The half-dozen or so Richard Bachman novels that King wrote are generally thought to have a harder, less supernatural, but more cutthroat edge to them than King’s regular work. King has written about his reasons for writing under this false identity—a mixture of publisher concern about market saturation of the “Stephen King” brand and King’s personal desire to find out whether or not he could replicate his success. The Bachman novels represent a fascinating phase of King’s career that I’d love to explore further as time allows. Without further ado, here are my thoughts, adapted from a review I posted on Goodreads this summer. 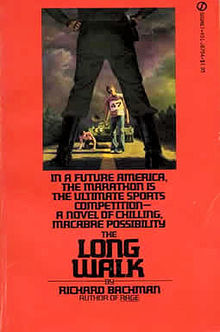 My thoughts: Like Stephen King’s other early “Bachman” novels, The Long Walk is not a supernatural or traditional horror story.It is instead a precursor of the “teen dystopia” genre dominated today by the Hunger Games books. Set in an alternate-history modern America, The Long Walk follows the teenaged participants in a gruesome national pastime: a walking marathon that ends when only one walker is left standing.

I was surprised at the level of tension King can wring out of a very straightforward story, one that follows a single character’s perspective and which never turns its eye away from the contest. The writing is classic early King–sometimes awkward, sometimes brilliant, but almost always compelling. I can’t think of many King novels that star teenage protagonists to the extent this one does, and was impressed with his articulation of the teenage male perspective. The dialogue (and the main character’s internal monologue) can get pretty hamfisted as the doomed boys discuss God, Love, Sex, Death, The Meaning of It All, and all those other Big Topics–but heck, I remember having the same big dumb conversations with my friends as a teenager back in the day. (Granted, those conversations took place in less dire personal circumstances.)

This earnest teenage perspective gives the story a certain nostalgic feel. It also dwells heavily on the relationships that form between the walkers–since the walkers can’t directly harm each other, there’s no Lord of the Flies-style ganging up and only one (hateful, but largely harmless) “villain” character. Instead we explore the weird almost-friendships that evolve over the course of the contest. (That these friendships are all doomed is, of course, part of the effectiveness.)

Overall, this is a simple but surprisingly effective story. Recommended if you’re a Hunger Games fan who wants to take a look at an earlier example of the genre, or if you want to read something slightly offbeat by King that isn’t supernatural horror.

Next up: The next story in the lineup will likely be “The Night Flier,” as mentioned above. However, if I can fit in another King novella, it will likely be “The Langoliers” from Four Past Midnight. No guarantees about the novella, though—I’ve also got a book group novel to read this month. Oh, the pressures of being a full-time reader!