Spoiler-filled synopsis: A bizarre, mostly-immobile alien creature, crudely camouflaged as a run-down vehicle, appears at an abandoned highway rest stop, where it waits for Good Samaritans to approach and then eats them. After a sequence of hapless people are killed, a trio of kids drives the creature off by burning it with a magnifying glass. 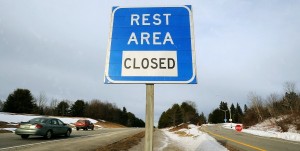 My thoughts: I’m tempted to say that “Mile 81” is a quintessential Stephen King story. It’s not one of King’s best stories, but it pulls in so many of his favorite themes that it reads pleasantly like a grab-bag of Stephen King tropes. In an introduction to the story, King describes it as one of his favorites, and I think I can see why.

So let’s walk through the major Stephen King themes that make appearances in “Mile 81.” First up is boyhood nostalgia. The closest person to a main protagonist in this story is a 10-year-old boy named Pete, who has one foot in the innocence of childhood and the other in the scary, exciting world of Growing Up. The entire first third of the story simply follows Pete as he makes his way to and then explores the abandoned Mile 81 rest stop. It is Pete who will ultimately use his Kid Ingenuity to figure out how to drive off the monster lurking at the rest stop.

Many horror and fantasy stories are coming-of-age tales, and a good number of the genre’s great writers specifically use preteen boyhood as the framework for their horror: several that spring immediately to mind include Ray Bradbury’s Something Wicked This Way Comes, Dan Simmons’ Summer of Night, Neil Gaiman’s The Ocean at the End of the Lane, Peter Straub’s Shadowland, and King’s own It. I won’t delve into the (fascinating!) intricacies of this sub-genre now, but a common feature in such stories is that the “magical worldview” of childhood lets kids triumph over supernatural evil, while grown-ups (who set aside their belief in the magical and supernatural upon Coming of Age) are often helpless against it. That’s certainly the case in “Mile 81;” Pete (and two other small children who join him for the story’s conclusion) accept at face value that they’re dealing with an evil man-eating alien monster and act decisively; every single adult who appears in the story falls victim to it because they simply don’t/can’t recognize or believe what they’re dealing with.

The next recognizable Stephen King staple here is the random and unexplained manifestation of evil, in a form that is uncomfortably both terrifying (a shapeshifting horror!) and ridiculous (…that looks like an old car and eats people!). Many of King’s best stories exhibit a worldview in which Bad Stuff happens to Good People for no discernable reason or grand purpose. King also likes exploit the awkwardness we feel when confronted by an Evil Thing that is both legitimately scary and slightly goofy at the same time. Shape-changing alien blobs and killer cars fall squarely into that tortured category.

Lastly, King loves his characters. Read a few King stories and you’ll quickly see how much he enjoys sketching out the backstories of everyone who crosses into his tales—even minor throwaway characters who exist in the story only to be killed off horribly. Several such characters appear here (all of the doomed adults), and King lavishes several pages of non-essential but highly entertaining background for each of them, giving us a feel for the life choices and quirks of personality that make them the kind of people who will pull into an abandoned rest stop to investigate a creepy-looking car. There’s a Bible-thumping lay preacher (King James Version only, of course!) who wants more than anything to emulate the Good Samaritan; there’s the lesbian horse trainer who can’t not stop to help somebody in need; there’s the vacationing family of four that any parent will quickly relate to. (The parents are killed, but the plucky children survive, although they’ll probably be in therapy for the rest of their lives.)

These are all great themes—story elements that King obviously loves and that he rarely fails to put to good use. “Mile 81” falters in just a few areas, notably its odd pacing: Pete is the main character for the first third, then disappears entirely to be replaced by a series of short sketches of doomed grown-ups, after which he abruptly reappears in the final pages to defeat the monster. The depiction of young children in action is mostly good. Pete is a believable ten-year-old, although the slang terminology he uses feels rooted in King’s own childhood rather than the modern era in which this story takes place. There’s a very likeable six-year-old who is a little too worldly-wise for her years (I say this as the father of a precocious daughter), and her little brother who goes through fairly plausible four-year-old mood swings between mourning his eaten-by-a-monster parents and wanting to retrieve his Transformers toys from the car. The tone of the story’s finale, however, is strangely upbeat and light-hearted given that two of the three survivors just watched their parents get devoured by an alien.

But all in all, this works well. It’s a good choice with which to open a short story collection, both for its general quality and because it’s a very recognizably Stephen King story. Recommended.

Next up: Let’s stick with The Bazaar of Bad Dreams for a bit here, and tackle the next story in the collection: “Premium Harmony.”