The story: “Night Surf,” collected in Night Shift. First published in 1969 (but revised heavily for its inclusion in Night Shift a decade later). Wikipedia entry here.

Spoiler-filled synopsis: A small band of teenagers has survived an apocalyptic plague that has wiped out most of the rest of the world’s population. But they’ve succumbed to a hopeless nihilism, and are starting a descent into barbarism. As the story ends, one of them falls ill, and the others realize that they may not be immune to the plague after all. 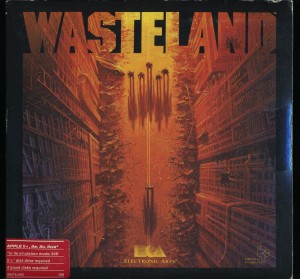 Not quite like this. But I can’t miss a chance to post the greatest video game cover art ever.

My thoughts: “Night Surf” is a quiet, sad post-apocalyptic story told from the perspective of the Bad Guys.

In most grand post-apocalyptic stories, the plucky heroes of the tale eventually encounter a band of barbaric marauders roaming the wastes looking for victims. These marauders are usually more than a little crazy, often bloodthirsty or even cannibalistic, and are led by the most clever or brutal of their number. Or they’ve formed a sick, murderous religious cult that they believe protects them from extinction. They’re a dark mirror of the heroes: heroes cling to their humanity in the face of apocalypse, but these lost souls have surrendered their humanity and live cruel, almost beastlike lives.

“Night Surf” paints us a picture of the sort of people who, having somehow survived the apocalypse, are on the verge of embracing madness and nihilism. Despite their survival, they’ve lost all hope for their future, and lack the moral strength to rebuild… or do much of anything besides wait around for death. As the story begins, they have just crossed a line into barbarism: they’ve murdered a dying plague victim as a sort-of-joking sacrifice to any dark gods out there that might spare them from the plague. They don’t really believe it, but what can it hurt, right?

Bernie, the main protagonist, remembers just enough of his conscience to understand that what they’ve done isn’t funny or appropriate; it’s horrible. But he went along with it anyway. He’s a bitter, unlikable person, cruel to his girlfriend (a fellow survivor) and constantly pulled into memories of the times before the plague, when everything was OK and they weren’t bad people.

Little actually happens, plot-wise, in “Night Surf;” it’s mostly a simple portrait of despair. As the story ends, it’s looking like everyone is going to get what’s coming to them: one of the group of survivors comes down with plague symptoms, and the rest of them begin to process the fact that their perceived immunity might be just one more cruel cosmic joke.

It’s a sad and understated story, which feels strange to say given that it features a killer plague and a band of murderous survivors. King effectively balances the hopelessness of the survivors’ lives with memories of more innocent times, with the result that you feel pity for these lost characters, rather than anger or hate.

“Night Surf” has an obvious connection to King’s post-apocalyptic novel The Stand, and is presumably set in the same universe as (or in an early version of) that novel. In The Stand, a superplague wipes out most of the world population, and a ragtag band of survivors bands together to rebuild society. The lost souls of “Night Surf,” if they survive the plague, would almost certainly wind up in the camp of The Stand‘s villain, who gathers weak-willed and evil-inclined survivors into his cruel community.

This is a good story that cuts deeper than I expected. And it’s got me eyeing my copy of The Stand, which is surely due for another re-read one of these years….

Next up: By happy coincidence, King has just released a new short story collection, The Bazaar of Bad Dreams. I don’t think I can resist, so let’s go ahead and look next at the first story in that collection, “Mile 81.” I’ll be tackling this at a slower pace than before… which gives you some time to run out and buy a copy!