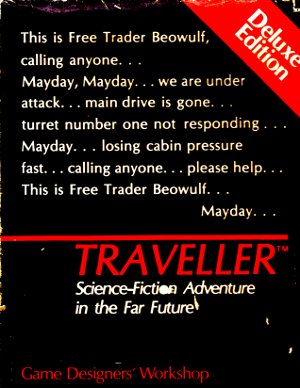 Also, your character could die during character generation. Or so I am told.

As fortune would have it, I’ve read a number of (non-Dungeons & Dragons) novels lately that have contained clever references to D&D. Ready Player One by Ernest Cline is chock full of them. Lev Grossman’s The Magicians has a good number as well. Nerd references are the cool thing these days. But The Magician King, the sequel to The Magicians, has officially one-upped it with an even more nerdy RPG reference in the name of an online mental-health support group one of the protagonists joins:

…the support group really was pretty dandy. It was something special. It was founded by a woman who’d worked successively at Apple, and then Microsoft, and then Google…. before she rolled neurochemical snake eyes and a bout of clinical depression knocked her out of the sky…. So she retired early and started Free Trader Beowulf.

Free Trader Beowulf—you had to be at least forty and a recovering pen-and-paper role-playing-gamer to get the reference, but it was apt. Google it.

It would’ve been even better if Grossman had not let on that it was an RPG reference, so that people like me could feel all superior for noticing it. It’s a shout-out to Traveller, a classic sci-fi RPG first published in the 70s. (It’s still around.)

If D&D references have become commonplace, then a Traveller reference is at least kicking it up a notch. Mark my words, next year it’s going to be Tékumel and Tunnels and Trolls references. You read it here first!

8 thoughts on “This is Free Trader Beowulf, calling anyone…”