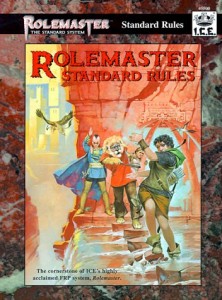 Hey, look! A new version of the vintage Rolemaster RPG is out, and they’ve released public playtest documents for the teeming masses to try out.

I’d say Rolemaster has certainly earned a new edition—the last serious rules upgrade was in the mid-90s (the Rolemaster Standard System); there was technically a further revised edition around the turn of the century, but it was mostly a re-organization of the rules, with no major rules changes. All of my Rolemaster gaming used the older 2nd edition; I picked up a few RMSS books but then 3rd edition D&D came out, boasting a heavy Rolemaster influence with a simpler and faster system, and that’s when I officially jumped off the Rolemaster train.

I haven’t kept up with Rolemaster much lately because, alas, there hasn’t been that much to keep up with—new releases have been scarce over the last five or more years and the Rolemaster community doesn’t have a large online presence these days. I’m very happy to see a new version in the works and have already downloaded the playtest files. That said, my interest is mostly fueled by nostalgia at this point; unless the complexity has been dialed down a good bit, Rolemaster would be a pretty hard sell for me and my current game group except as an occasional side game. (And dialing down the complexity might take the spark of life out of Rolemaster, so I don’t know if I really want that.) But you never know.

(And it’s no fault of Rolemaster itself, but without the late Angus McBride‘s glorious illustrations, it just doesn’t feel quite the same.)