The story: “The Dune,” collected in The Bazaar of Bad Dreams. First published in 2011. Wikipedia entry here.

Spoiler-filled synopsis: As a child, Harvey Beecher discovered something bizarre: a tiny island with a sand dune on which, each day, is written the name of somebody who will soon die. Now a bitter old man, Beecher returns from his latest visit to the dune and hastily summons his lawyer to finish drafting his will. Whose name do you think he saw scrawled in the sand?

My thoughts: Premonitions of death—especially of your own death—are a beloved staple of spooky storytelling, from the Bible to modern teen-scream movie franchises. That’s the rich vein that King taps in this short tale about a grumpy retired judge who’s found a way to get advance notice of upcoming deaths. 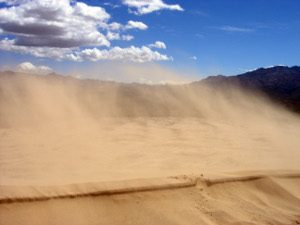 Since childhood, Judge Beecher has been visiting on an almost daily basis an isolated island where he can read, scrawled in the sand on a dune, the names of people who will soon die. When, after his most recent visit to the island, he hastily summons his lawyer to complete work on his last will and testament, we assume that Beecher has finally seen his own name written on the creepy dune. King feints in this direction for most of the story before producing a twist ending: Beecher hasn’t seen his own name in the sand, but that of his lawyer… hence the frantic rush to get the lawyer to complete work on Beecher’s will (before the lawyer dies and Beecher has to go through the hassle of finding new legal assistance).

Effective twist endings are tricky to pull off, particularly these days when we’ve seen so many of them in stories, books, and film. Yet we readers still hope for and expect them, and I don’t envy writers who have to try and mislead a readership that is actively hunting for the trick. Here, King knows you’re scrutinizing the story for the inevitable twist, so he does his best to make you think you’ve guessed what that twist will be, before surprising you in the story’s final sentences with a different twist. And it works, but imperfectly; to keep readers thinking down the wrong trail, King has to try a little too hard, mainly by emphasizing a few too many times that Beecher is very old and frail. When the punchline arrives, it’s fun, but because you hardly know and aren’t emotionally invested in the lawyer character, it has little lasting impact.

There are a few other noteworthy bits in this short tale. First is the mysterious dune itself. As usual, King resists the urge to try to explain what the deal is with the dune. Beecher does, however, propose one interesting possibility: that the dune is a location where for some reason the skin of the cosmos has worn thin, exposing a tiny glimpse at the inner workings of fate to anyone (un)fortunate enough to stumble across it. Depictions of supernatural encounters as largely random, impersonal, and undeserved are common throughout King’s writing.

Secondly, there’s the fact that Beecher doesn’t take any action to change or subvert these prophesied futures. Stories in which people receive frightening premonitions of the future typically focus on their (usually futile) efforts to change that future. (King has written tales of this sort as well—most notably his novel 11/22/63, about a time-traveler’s attempt to prevent the JFK assassination.) You might imagine that Beecher would act on his terrible knowledge by warning doomed people, destroying the dune, or something else. But despite his daily visits to the dune, the only time Beecher seems to have ever taken action is, as in this case, when he stands to be personally inconvenienced by the foretold death.

All in all, this is a short, solid, but largely unremarkable tale with a fun little twist ending. There’s not a lot to “The Dune” beyond that surprise; this is a simple story that exists entirely to deliver you unsuspecting to the final sentence’s revelation.

Next up: “Gramma,” in Skeleton Crew.