I never visit a used bookstore without checking its science fiction/fantasy section for used board or roleplaying games. If you’ve ever come across an amazing find in a neglected, dust-covered stack of old games at a used bookstore, you’ll agree that previously-owned games are much more fun to buy than brand-new shiny ones.

There’s something satisfying about reading and playing a game that somebody else has enjoyed. Flipping through a rulebook filled with somebody else’s signature, gameplay notes, or character sheets, you wonder: Why did they buy this game? What did they do with it? Did it entertain a group of friends for years, creating memories that they all recall fondly to this day? Or was it played once and set on the shelf to gather dust?

The used games on my bookshelf are filled with interesting artifacts of their previous owners. One of my first roleplaying purchases was previously owned—I bought the 2nd edition AD&D rulebooks from somebody who had upgraded from 1st edition but then decided that he hated the changes between editions. (He ranted as he sold me the books that the new edition was the death knell of D&D—an argument that’s trotted out to this day everytime a new D&D edition is released.)

All throughout the Player’s Handbook, whenever he came across a difficult vocabulary word, he penned in its definition above it: 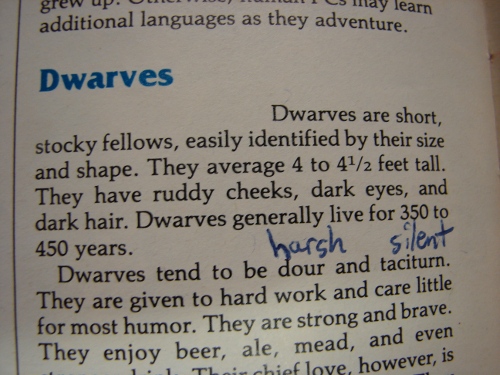 Gary Gygax was the best thing to happen to my teenage vocabulary and reading comprehension.

Used boxed games are often a treasure trove of insight into their former owners. I have quite a few filled with custom character sheets and campaign notes. Here’s an example of such a character sheet from my used copy of Twilight 2000:

Meet Alexander Kaliber, no doubt a carefully balanced and realistic character. Check out that armament!

Paper-clipped to that character sheet were ten pages photocopied from a book about modern (in the 1980s) chemical warfare. I hope that was just in-game research.

You can also get a sense of how people prepared for their games. Several of my old D&D adventure modules contain map notes scribbled in by devious gamemasters. My tattered copy of The Great Old Ones for Call of Cthulhu is filled with highlighting—presumably the GM needed some help remembering important game details: 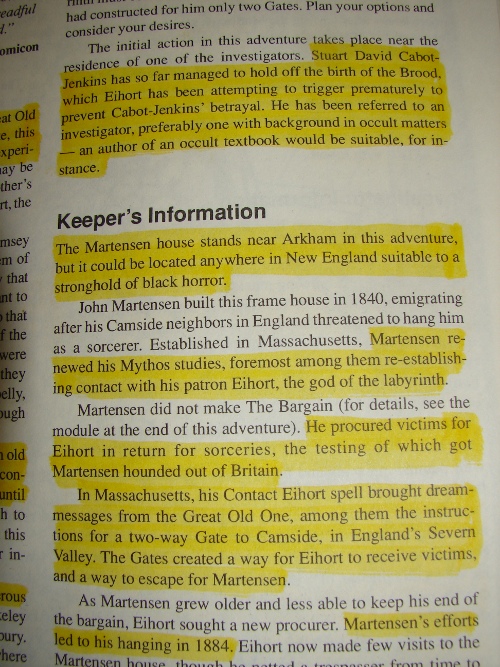 Seriously, the entire chapter is highlighted this heavily. It's headache-inducing.

And occasionally, you find something just bizarre in an old game. Last weekend, my wife treated me to a trip to the local used bookstore, where for a Father’s Day present I picked up a banged-up but mostly complete copy of the wargame 2nd Fleet. 2nd Fleet is a complicated, realistic emulation of NATO-Soviet naval warfare in the North Atlantic. So what did I find folded up and tucked guiltily into the rulebook? 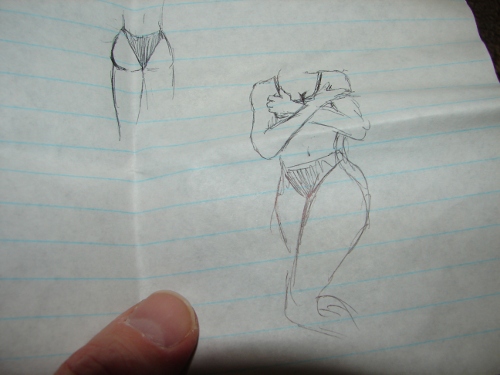 Why--what were you expecting to find hidden in the rulebook for a highly-complex historical simulation?

I feel a strange compulsion to leave that keep that lurid sketch in there—at this point, it’s almost part of the game.

I can only hope that when I sell off my games, I leave a few gems hidden away in them for future gamers to discover… and feel uncomfortable about.