Spoiler-filled synopsis: An American couple on vacation in England gets lost—very lost—while walking through the London neighborhood of Crouch End. As they try to navigate unfamiliar streets, they have increasingly unsettling encounters and are pulled into a nightmarish Lovecraftian dimension, where the husband vanishes. His wife survives and returns to the “real world,” but her sanity has been dealt a devastating blow. 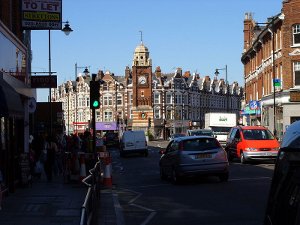 It doesn’t seem quite so terrifying in the light of day.

My thoughts: Another explicitly Lovecraftian short story, “Crouch End” differs from “Jerusalem’s Lot” in that it’s not a direct pastiche of Lovecraft’s writing style. “Crouch End” is a modern horror story, and works better because King is free to bring his own writing style and thematic interests into the story, rather than simply mimicking Lovecraft.

“Crouch End” is more explicitly a “Cthulhu mythos” story than “Jerusalem’s Lot,” too. “Jerusalem’s Lot” quite clearly takes place in Lovecraft’s meta-setting of forbidden knowledge and unspeakable god-monsters, but it steers clear of actual mentions of specific Lovecraft characters or entities. “Crouch End” actually comes forward and name-drops several beings from the Cthulhu mythos… almost. I qualify that statement because King doesn’t quite name them: some of the mythos entities mentioned here have very slightly misspelled names: “Yogsoggoth” instead of “Yog-Sothoth,” “Nyarlahotep” instead of “Nyarlathotep,” “R’Yeleh” instead of “”R’lyeh,” etc. I’m not sure if King did this to avoid a lawsuit (the Lovecraft copyright legacy is notoriously messy), to recapture the unpronounceable nature of names that are now familiar to most horror and sci-fi nerds, or to simply irritate Lovecraft purists.

(I should note here that “Crouch End” is largely responsible for introducing me to, and getting me obsessed with, the writings of H.P. Lovecraft in college. While I was mildly aware of Lovecraft’s name and influence when I first read this story, this was the first place I encountered those bizarre, unpronounceable names, and it hooked me. In the early 1990s, Lovecraft and the Cthulhu mythos were not nearly as ubiquitous in pop culture as they are these days.)

“Crouch End” departs from both King and Lovecraft in that it’s set not in New England (the usual stomping grounds of both authors’ pet horrors) but in actual England. This has the effect of evoking the Lost American Tourist Abroad trope. You might not think of London as being an especially alien place to Americans, given our general obsession with the British (my wife is watching a low-budget interwar British mystery in the background as I type this)1; but I would say there’s some potential creepiness to be mined from contradictory (and probably quite inaccurate) American stereotypes of British hospitality and snobbiness, not to mention all that History they’ve got going on over there. King also manages to use more British colloquialisms in the first two pages of “Crouch End” than appear in the entirety of Jeeves and Wooster.

So what of the story itself? It’s good, particularly in the way that King slowly escalates the tension. It starts with one or two unpleasant encounters with unsavory Crouch End residents, but becomes increasingly unsettling until Lonnie (the husband) is attacked by some kind of inhuman horror. King nicely does not describe the encounter; an unhinged Lonnie refuses to provide details for his wife Doris, or for us. As Lonnie and Doris become more and more lost, their surroundings begin to warp and the stars in the night sky become unfamiliar. It is suggested that “Crouch End” is a place where the veil between our world and some hideous otherworld is weak, allowing horrors to occasionally cross over from there to here (and allowing lost tourists to occasionally wander in the other direction).

It’s all nicely random and unexplained, in a typical Stephen King “why do bad things happen to good people?” sort of way. True to Lovecraftian form, the couple’s encounter with alien horror takes a toll on their sanity. Doris never quite recovers:

Sometimes when she cannot sleep—this occurs most frequently on nights when the sun goes down in a ball of red and orange—she creeps into her closet, knee-walks under the hanging dresses all the way to the back, and there she writes Beware the Goat with a Thousand Young over and over with a soft pencil. It seems to ease her somehow to do this.

Oh, Steve. You had way too much fun writing those sentences, didn’t you?

Next up: “Mrs. Todd’s Shortcut,” in Skeleton Crew.

1 Miss Fisher’s Murder Mysteries is set in Australia? I thought it was London. Although now the extended scenes on the beach make more sense.