Spoiler-filled synopsis: A psychiatrist counsels a new patient who exhibits extreme symptoms of obsessive-compulsive disorder. The patient, referred to in the doctor’s notes as “N.”, claims that his compulsive, ritual behavior is necessary to prevent the incursion into this world of extra-dimensional Lovecraftian horrors. When N. commits suicide, the psychiatrist investigates… and soon comes to share the late N.’s obsessions. 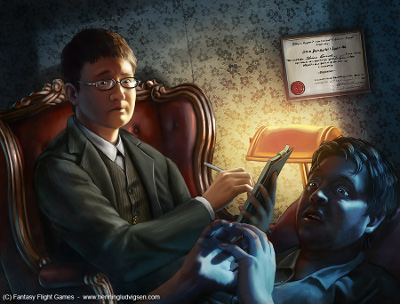 My thoughts: King once again returns to the themes and mythology of H.P. Lovecraft in this novella-length story. Although King notes in the closing notes of Just After Sunset that “N.” is an homage to Arthur Machen’s influential 1890 horror story The Great God Pan, it’s got “Lovecraft” written all over it.

And you know: it’s hard to make a Lovecraftian tale hit home these days. For one, Lovecraft’s tentacled monsters can seem more goofy than terrifying (my wife sips her morning coffee while wearing adorable plush Cthulhu bathroom slippers). The nihilist vision that lay behind Lovecraft’s stories—the fear that Christianity might be horribly wrong about mankind’s place in the cosmos—lacks the punch it had a century ago. And have I mentioned the racism?

All of this makes it interesting to see King returning to explicitly Lovecraftian territory late in his career. King has riffed on Lovecraft in earlier short stories, notably “Jerusalem’s Lot” and “Crouch End,” both of which paint rather neatly within the lines of the Lovecraftian sub-genre. With “N.”, however, King has found a twist with which to make the mythos his own: OCD. The man called N. stumbled (he says) across a Stonehenge-esque circle of stones while exploring rural Maine. A glimpse of something horrific in the circle convinced him that only through continuous, repetitive, time-consuming ritual acts (centered around numbers and geometry) can the unraveling fabric of reality be strengthened against the efforts of the nightmare entities trying to break through it. Without these activities, combined with regular, harrowing trips to the circle to spiritually reinforce it, the circle will fail and release whatever it’s holding back.

After confessing all this to his psychiatrist, N. commits suicide, overwhelmed by the singular burden of having to keep the world safe. The psychiatrist (who narrates most of the story through his counseling session reports) proceeds to investigate, encounters the same circle and Lovecraftian menace (a being called “Cthun”), descends into the same madness that claimed N., and kills himself as well. The story’s final pages suggest that several other people (the psychiatrist’s sister, and then a family friend) follow the two men into obsession and suicide; we imagine these four doomed souls as very short-lived links in a chain that has stretched through centuries or millenia.

The theatrical Lovecraftian bits of “N.” (the gothic circle of stones, the tentacled Cthun) are familiar and unremarkable. But what King absolutely nails about the Lovecraft mythos here is the insidious, merciless power of knowledge. What dooms these characters is what they know—once the veil of ignorance about the true, precarious state of humanity is torn away, they can never un-learn what they now know. In Lovecraft’s world, truth is a toxic meme, spreading from person to person with fatal results. Like a virus, it spreads to a new host just as the old host begins to break down. And even if it isn’t truth—if these characters are killed by a shared delusion—then we’re still dealing with something considerably more terrifying (in a 21st-century context) than Lovecraft’s slimy fish-gods: a deadly, highly contagious piece of information.

This is a very strong story. It’s light-years beyond straight-up Lovecraft pastiches like “Jerusalem’s Lot.” It makes use of Lovecraft staples like an epistolary narrative and descents into madness, but in the service of a very Stephen King tale. Highly recommended.

Next up: “Dedication,” in Nightmares and Dreamscapes.