Hey, ‘net punk! Look what some clever console cowboy has revealed on the inter-tron today:

And that’s interesting for a number of reasons. First, the Cyberpunk RPG is an oldie, firmly planted in the mirrorshades era of the cyberpunk genre; the kind of cyberpunk where you brush aside your ’80s bangs and “jack in” to a Gibsonesque (and by “Gibsonesque” I mean “ripped straight out of Neuromancer“) proto-internet and talk sneeringly about “meatbags.” There are “fresher” cyber-themed RPGs out there (Eclipse Phase, Shadowrun, Transhuman Space) that might be thought to offer a nicely updated cyberpunkish basis for a modern game.

Pondsmith’s Cyberpunk hasn’t been much in the public eye for years. The last time it was the focus of any attention, its most recent edition was being dragged over the coals for using what can only be described as “doll art” to illustrate its rulebook: 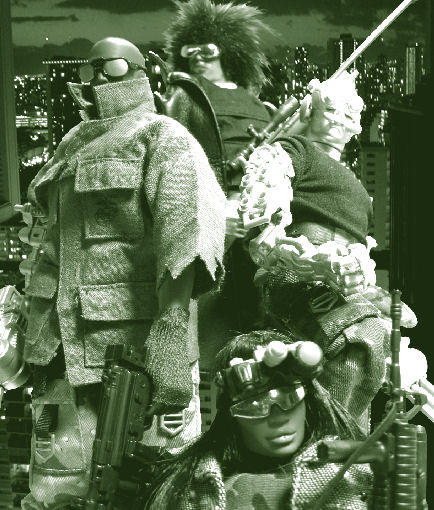 Let’s just say that it didn’t emerge from those discussions with a lot of dignity intact.

But I don’t mean to mock. (Let me go on record as believing that the “doll art” thing contains a seed of genius, but was badly executed.) This new Cyberpunk video game is a reminder that there is a long history of tabletop RPGs—even obscure and mostly defunct ones like Cyberpunk—that are ripe for reinvention and re-exploration, in video games or other media. That’s exciting.

So let me offer a few comments on the Cyberpunk 2077 trailer above.

Well, we’ll see where this all winds up. But we can be sure it won’t top this artifact from the glory days of cyberpunk gaming:

2 thoughts on “More human than human”