The story: “The End of the Whole Mess,” collected in Nightmares and Dreamscapes. First published in 1986. Wikipedia entry here. 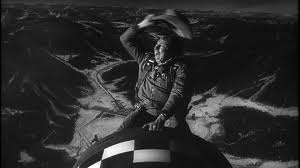 Spoiler-filled synopsis: In the darkest days of the Cold War, a hyper-intelligent scientist discovers a chemical that removes all violent instincts from anyone who ingests it. He manages to spread the chemical across the globe, bringing about world peace… but unwittingly also dooming humanity, because an unanticipated side effect of the drug is the Alzheimer’s-like mental degeneration of everyone exposed to it.

My thoughts: What is wrong with humanity? We’ve been asking that question for a few thousand years without settling on a satisfying answer. The pursuit of true, lasting world peace has been the subject of many stories and novels over the years, but what unites most such tales is a hunch that this is a problem that can’t be fixed. Any solution would surely come with a terrible catch… and in the end, curing humanity of its violent nature would also destroy whatever it is that makes us human.

Apparently, humanity is not only very violent, but very cynical about the possibility of ever not being violent. In our stories, attempts to fix ourselves never work.

“The End of the Whole Mess” is King’s entry into this little sub-genre of apocalyptic morality plays. (This story is probably best described as science fiction, alhough it’s a dystopian fable with relatively few sci-fi trappings.) It’s narrated by the brother of humanity’s “savior,” a naive genius named Bobby Fornoy who thinks he’s found a way to cure humanity’s violent impulses. Investigating a small town marked by a startling lack of violent behavior, he identifies a chemical that, when mixed into a water supply, will pacify anyone who drinks it. Despondent at the increasingly bleak state of the Cold War, he successfully carries out a scheme to spread the chemical across the globe. It works, but after a few years, the world’s population experiences a complete breakdown of mental faculties. It turns out that Fornoy, convinced that he had very little time before the world perished in the flames of Mutually Assured Destruction, had skipped the “extensive clinical trials” part of the process. As the story ends, the narrator (along with Bobby) succumbs to the drug; the story’s last paragraphs are weepy gibberish as the narrator’s thought processes degrade.

“The End” is written in a confessional style; it’s clear from the opening sentences that everything has ended badly, and the rest of the story is spent describing how it came about. The first half of the story describes Bobby’s childhood; the second half describes his discovery and his plan to save the world.

This story is a downer, to put it mildly. It draws heavily on the atmosphere of dread and pessimism that defined the Cold War; to feel its full effect today, you have to imagine (or remember) what it was like to live under the constant threat of nuclear war. (The violence we experience today—terrorism, civil war, etc.—is certainly horrible and depressing, but doesn’t plausibly threaten the very existence of humanity the way that the superpowers’ massive nuclear arsenals did.) “The End” feels a lot like an episode of The Twilight Zone, with its finger-wagging warning about hubris, and with its bleak but probably realistic belief that the price for changing human nature would be too high to pay.

I felt terribly sad while reading this story. Not really because of the plot, variations of which I’ve watched and read numerous times; but because King conveys well the narrator’s love for his naive, well-intentioned brother even at the end. As the narrator’s mental coherence crumbles in the story’s final pages (a process that calls to mind Flowers for Algernon), he is reduced to crude, childlike expressions of love, sadness, and forgiveness, and I guess I’m a bit of a wimp, because it made me feel like crying.

That makes this a successful story, in my mind. Worth reading if you like Rod Serling-style lectures about mankind’s hubris, or (as with yesterday’s “Beachworld”) if you want to see King try his hand at a story outside the horror genre.

Next up: “Sometimes They Come Back,” from Night Shift.

1 thought on “Stephen King Short Story Project, #17: “The End of the Whole Mess””