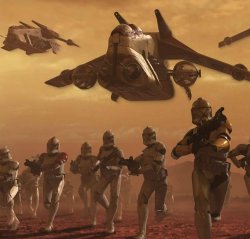 4 thoughts on “Why weren’t the Clone Wars cooler?”