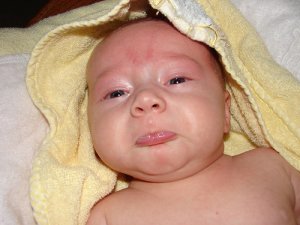 One of the most fun parts of pregnancy—from my perspective as a dad, at least—was brainstorming names for our little Bundle of Joy. For years (well before the pregnancy happened), Michele and I have noted cool, amusing, and interesting names that might be appropriate for a hypothetical child. Most of them were probably not appropriate, being ancient Mesopotamian and Byzantine in origin, but when we learned last year that a baby was on the way, we were nevertheless faced with the challenge of distilling a monstrous list of potential names down to our very favorites.

I won’t list out the various names we considered (hey, if another baby ever comes along, we might put one of them to use). But as you know, an important part of choosing a baby name is trying to think of any possible embarassing nicknames that might be derived from the name by angsty junior-high classmates. We were unable to come up with anything too awful for Thessaly (what’s that—you thought of a dirty-sounding nickname? Get your mind out of the gutter!), but since her birth we have nevertheless seen the emergence of many nicknames that we never anticipated.

Here’s a partial list of names that we’ve used for Thessaly that are not her actual name:

We’ll have to get in the habit of using her actual name by the time she becomes sufficiently aware as to understand what we’re saying—I don’t think we really want her going through life as T-Bot. (OK, that would actually be kinda cool.) So what obvious nicknames for Thessaly are we missing?

Oh, and choice #2—narrowly beaten out by “Thessaly”—was the name of a Byzantine empress. Maybe next time.

4 thoughts on “In nomine”