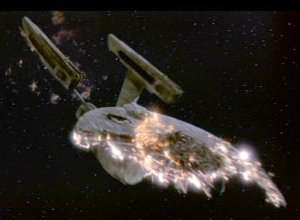 You’ll forgive me, I hope, if I yammer about a board game for a few minutes. It’s been a while since I’ve subjected you to such trivia.

As I have no doubt mentioned, I am a fan of the Star Fleet Battles board/wargame. Now, this is a game with a lot of rules. The “master rulebook” runs over 400 pages, and a second master rulebook covering a different quadrant of the galaxy recently came out at an additional 340 pages. While it’s a very fun game, those rules do not make for a riveting read-through (not that that’s stopped me, of course). But every now and then you hit something quirky in the midst of all the rules legalese that makes you grin.

For example, here’s one of my favorite little rules in the entire game. It’s something that will probably never happen in a typical game. It describes what happens when a starship captained by a “legendary captain” (think Kirk or Picard) is destroyed:

[G22.223] If his ship is destroyed, he has a 1% chance of doing something that results in his being aboard and in control of the nearest enemy ship of the same or smaller size class…. All legendary officers and remaining crew arrive with him. (Don’t ask how he did it; that’s what legends are made of!)

I assume that rule is inspired by Star Trek III, which features Kirk self-destructing the Enterprise yet shortly thereafter taking control of the Klingon Bird-of-prey through various bits of trickery. Who could forget this classic scene (thank you imdb):

Torg: [the Klingons have boarded the Enterprise only to find it is deserted] My Lord, the ship appears to be deserted.
Kruge: How can that be? They’re hiding.
Torg: Yes, sir. The ship appears to be run by computer. It is the only thing that is speaking.
Kruge: Speaking? Let me hear it.
Enterprise computer: [Torg walks over to a console, placing his communicator towards it] 9-8-7-6-5…
Kruge: [shouts] Get out! Get out of there! Get out!
Enterprise computer: 2-1…
[the Enterprise bridge explodes]

Other fun rules cover similarly rare but cool game events, like crew mutiny on Klingon ships whose security officers have been killed (in the game universe, Klingon ships are crewed largely by slaves) and what happens when you tractor an enemy ship and then drag it at high speed into a planet. They’re situations that rarely if ever come up in your average game—but you know that when they do, they fuel Gamer Stories for years to come.

3 thoughts on “Always be careful when destroying the Enterprise”