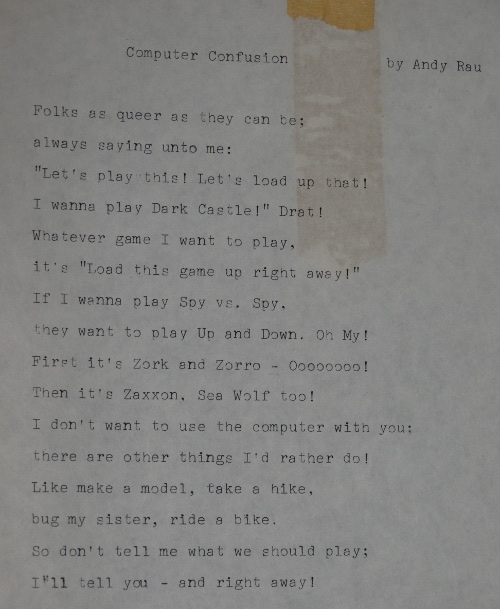 I mess up these idioms often. Well, as often as I attempt to use them. Which is occasionally.

In short, it’s “jury-rigged” and “jerry-built,” and it is a crime against reason to mix and match elements of those two terms.

I am informed by certain meddling Escondidan bloggers that today is Blog Poetry Day. Not wanting to miss out on a chance to share my favorite verses with you, my faithful readers, allow me to present the most sublime rhyming couplet in the history of poetry:

The end had come, and this was it;
He dropped her in the flaming pit.

That’s from Edward Gorey’s “The Disrespectful Summons.” I actually first encountered it in the InvisiClues hint book for Zork III, and it’s just stuck with me ever since.
If I were pressed to come up with a second-favorite bit of poetry, I might submit the lyrics to “I Hate My Generation” by the band Cracker:

Profound. Not that I really feel that way about my fellow Gen-Xers (am I a Gen-Xer? I never did figure that out)–and if I did, present company would of course be excluded.

This is the most awesome thing I’ve read all year.

Speaking of linguistic snobbery, do you know what else I hate? I hate thesauri. I never use them; I consider them a blight on the English language.
Maybe that’s putting it a little harshly. But thesauri have always struck me as a lazy and misleading way to artificially boost one’s vocabulary; they let you fling words about carelessly without first proving that you understand their meanings and nuances. They give the false impression that two or more words can mean the exact same thing, when the reality is that every word has its own distinct shade of meaning–no matter how similar it might be to another word. You can’t just replace one word with another nearly-identical-in-meaning word and pretend that you haven’t subtly altered the meaning of your sentence. Thesauri let you use words before you’ve proven yourself worthy do to so.
My own wife–my own wife–just rolled her eyes at me when I stated this important fact. I know that you, dear readers, will understand, even if she doesn’t.

This is a fun article about the use and abuse of the English language.
From time to time, I channel the Grammar Nazi myself. Among the abuses that particularly annoy me:
1) I was wondering if you are coming to the festival tomorrow? Arrrgh! Make a Statement or ask a Question, but don’t use a question mark to fuse them together into an abominable hybrid Statement-Question!
2) He’s the gentleman I was talking to. Arrgh, and arrrgh again! Don’t end sentences with prepositions! Don’t, I say! Cases in which doing so is appropriate are rare indeed, and your sentence is unlikely to be one of them.
To my great shame, I occasionally make these mistakes myself. I never committed such offenses before I met the internet and email, which tends to confirm my suspicion that the Inter-Web is slowly but surely making me stupid.
p.s. I spell “occasionally” wrong almost every single time I use it. My sin nature always wants to insert an extra ‘s’. (Or should that be ‘s.’? I’ll save that rant for a future post.)

I’ve been catching up on my blog-reading (so many blogs, so little time!) and I noticed that Bill beat me to the punch on the comma-(mis)use topic by two days (see his Point #5)! Uncanny. Bill, my post was not intended as any sort of subtle commentary on your use of commas, which I find quite commendable in every respect. Just in case, you were losing sleep, over it.

People, need to learn, how to use commas correctly.